Attor’s espionage operation is highly targeted – we were able to trace Attor’s operation back to at least 2013, yet, we only identified a few dozen victims. Despite that, we were able to learn more about the intended victims by analyzing artifacts in the malware.

For example, in order to be able to report on the victim’s activities, Attor monitors active processes to take screenshots of selected applications. Only certain applications are targeted – those with specific substrings in the process name or window title.

The list includes the two most popular social networks in Russia (Odnoklassniki, VKontakte) and a VoIP service provided by a Russian telecom operator (Multifon). Our conclusion is that Attor is specifically targeting Russian-speakers, which is further supported by the fact that most of the targets are located in Russia, as seen in Figure 1. Other targets are located in Eastern Europe, and they include diplomatic missions and governmental institutions. In addition to its geographical and language targeting, Attor’s creators appear to be specifically interested in users concerned about their privacy.

The victim’s usage of TrueCrypt is further inspected in another part of Attor. It monitors hard disk devices connected to the compromised computer, and searches for the presence of TrueCrypt. If TrueCrypt is detected, its version is determined by sending IOCTLs to the TrueCrypt driver (0x222004 (TC_IOCTL_GET_DRIVER_VERSION) and 0x72018 (TC_IOCTL_LEGACY_GET_DRIVER_VERSION)). As these are TrueCrypt-specific control codes, not standard codes, the authors of the malware must actually understand the open-source code of TrueCrypt installer. We have not seen this technique used before nor seen it documented in other malware.

Attor consists of a dispatcher and loadable plugins, all of which are implemented as dynamic-link libraries (DLLs). The first step of a compromise comprises dropping all these components on disk and loading the dispatcher DLL.

The dispatcher is the core of the whole platform – it serves as a management and synchronization unit for the additional plugins. On each system start, it injects itself into almost all running processes and loads all available plugins within each of these processes. As an exception, Attor avoids injection into some system and security‑product‑related processes.

Calls to the function dispatcher take as their arguments the function type and its numerical identifier. This design makes it harder to analyze individual components of Attor without having access to the dispatcher, as it translates the specified identifier to a meaningful function that is then executed.

Figure 3 illustrates a part of one plugin, calling the function dispatcher on several occasions. In the disassembly on the right, we have replaced the numeric identifiers (that we recovered by reverse-engineering the dispatcher) with descriptive names. Refer to our white paper for a full analysis of the dispatcher’s interface.

We were able to recover eight of Attor’s plugins, some in multiple versions – we list them in Table 2. Assuming the numbering of plugins is continuous, and that actors behind Attor may use different sets of plugins on a per‑victim basis, we suspect there are even more plugins that have not yet been discovered.

Attor has built-in mechanisms for adding new plugins, for updating itself, and for automatically exfiltrating collected data and log files. These mechanisms are illustrated in Figure 4.

In the following sections, we focus on plugins responsible for the two notable features that gave Attor its name – GSM fingerprinting via AT commands, and elaborate network communication using Tor.

Figure 4. Attor’s architecture. Note that ID 0x06 represents a single plugin, but the functionality is split here into two parts for clarity.

Attor’s espionage plugins collect sensitive data (such as a list of documents present on the disk) that is ultimately exfiltrated to a remote server, but these plugins themselves do not communicate over the network.

Only two of Attor’s components communicate with its C&C server: File uploader and Command dispatcher.

Files collected by the “espionage plugins” (Device monitor, Screengrabber, Audio recorder, and Key/clipboard logger) are uploaded to the C&C server automatically by the File uploader plugin. These plugins use a dedicated Upload folder as a central folder to store collected data, and other plugins use it to store log files.

The Command dispatcher plugin downloads commands and additional tools from the C&C server and interprets them. Again, it uses dedicated folders to store its data – most prominently, freshly downloaded plugins and platform updates, and encrypted log data containing status/results of the executed commands.

Attor’s dispatcher monitors the shared folders, and loads any new plugins and updates pushed to the compromised computer.

This means that neither Attor’s dispatcher, nor espionage plugins, ever communicate with the C&C server – they only use local shared folders for storing data to be exfiltrated and for reading further instructions from the server.

Both File uploader, and Command dispatcher use the same infrastructure to reach the remote server – the network communication itself is scattered across four different Attor components, each implementing a different layer.

Attor uses Tor: Onion Service Protocol, with an onion address for the C&C server. In order to communicate with the C&C server, any plugin must thus first establish a connection with the Tor client plugin (listening on the non‑default 127.0.0.1:8045) which is responsible for resolving the onion domain, choosing a circuit and encrypting data in layers. The Tor client plugin is based on the Tor client, and customized to the design of this malware (tor.exe with added interaction with Attor’s dispatcher).

The Tor client plugin must communicate with the dispatcher, which implements the cryptographic functions. Furthermore, it communicates with the SOCKS proxy plugin (listening on 127.0.0.1:5153) that relays communications between the Tor client and the remote server.

Both File uploader and Command dispatcher use FTP; files are uploaded to/downloaded from an FTP server that is protected by credentials hardcoded in the configuration:

The plugins log in to the FTP server and copy the collected data to, or download commands from, a victim‑specific directory.

In total, the infrastructure for C&C communication spans four Attor components – the dispatcher providing encryption functions, and three plugins implementing the FTP protocol, the Tor functionality and the actual network communication, as illustrated in Figure 5. This mechanism makes it impossible to analyze Attor’s network communication unless all pieces of the puzzle have been collected. 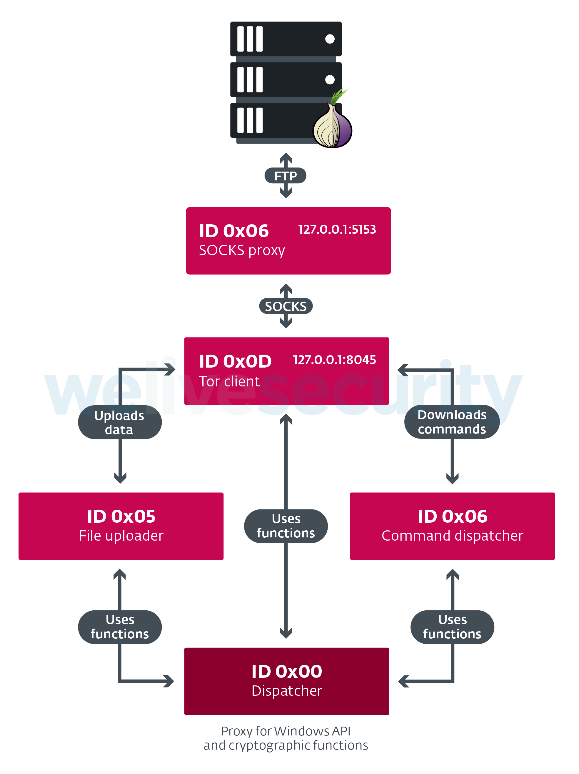 It is important to note that Attor uses several additional tricks to hide its communications from the user and security products:

First, the C&C server is a Tor service, aiming for anonymity and untraceability.

Second, all network-communication-related plugins are only activated if running within the process of a web browser or an instant messaging application or other network applications (this is determined by checking the process name against a hardcoded list). This trick hides the exfiltration-related network communication in a stream of legitimate communications made by that application, and thus reduces the risk of raising any suspicion.

The most curious plugin in Attor’s arsenal collects information about both connected modem/phone devices and connected storage drives, and about files present on these drives. It is responsible for collection of metadata, not the files themselves, so we consider it a plugin used for device fingerprinting, and hence likely used as a base for further data theft.

Whenever a modem or a phone device is connected to a COM port, Device monitor uses AT commands to communicate with the device, via the associated serial port.

AT commands, also known as Hayes command set, were originally developed in the 1980s to command a modem to dial, hang up or change connection settings. The command set was subsequently extended to support additional functionality, both standardized and vendor-specific.

In a recent paper, it was discovered that the commands are still in use in most modern smartphones. Those researchers were able to bypass security mechanisms and communicate with smartphones using AT commands through their USB interface. Thousands of commands were recovered and tested, including those to send SMS messages, emulate on-screen touch events, or leak sensitive information. That research illustrates that the old-school AT commands pose a serious risk when misused.

As for Attor’s plugin, however, we may only speculate why AT commands are employed. We have detected a 64-bit version of this plugin in 2019, and we can confirm it is still a part of the newest Attor version (that we first saw in 2018). On the other hand, it seems unlikely it is targeting modern smartphone devices. The plugin ignores devices connected via a USB port, and only contacts those connected via a serial port (more precisely, devices whose friendly names match “COM*”).

A more likely explanation of the plugin’s main motive is that it targets modems and older phones. Alternatively, it may be used to communicate with some specific devices (used by the victim or target organization) that are connected to the COM port or to the USB port using a USB-to-serial adaptor. In this scenario, it is possible the attackers have learned about the victim’s use of these devices using some other reconnaissance techniques.

In any case, the plugin retrieves the following information from the connected devices, using the AT commands listed in Table 3:

Note that many more (vendor-specific) AT commands exist that are not used by this plugin. It is possible that the malware operators use the listed commands to fingerprint the connected devices, and then deploy another plugin with more specific commands to extract information from the device.

Attor is an espionage platform, used for highly targeted attacks against high-profile users in Eastern Europe, and Russian-speaking, security-concerned users.

The malware, which has flown under the radar since 2013, has a loadable-plugin architecture that can be used to customize the functionality to specific victims. It includes an unusual plugin for GSM fingerprinting that utilizes the rarely used AT command set, and incorporates Tor with the aim of anonymity and untraceability.

Our research provides a deep insight into the malware and suggests that it is well worth further tracking of the operations of the group behind it.

ESET detection names and other Indicators of Compromise for these campaigns can be found in the full white paper: AT commands, TOR-based communications: Meet Attor, a fantasy creature and also a spy platform.

Acknowledgements to Anton Cherepanov, Peter Košinár, and Zoltán Rusnák for their work on this investigation.